Could we really have a near-waterless

Well, the Xeros Technology Group has signed a deal with Indian appliances group IFB Industries to manufacture domestic washing machines using Xeros water-saving XOrb and XDrum technologies. XOrbs are recyclable polymer spheres (which can absorb and retain large amounts of liquid relative to their own mass) developed to replace up to 80% of the water used in a usual cycle, while the XDrum stores the polymer spheres when they are not in use.

WRAS, the Water Regulations Advisory team says that washing machines are one of the biggest users of water with an estimated 50 litres per wash, and not surprisingly, older machines use even more than this.

Environmentally preferable products (EPP) are widely recognised as having lower environmental impacts than typical products in the same category. According to Xeros, during the past five years, just over 887.2 million litres of water – enough to keep the taps running for a year in 5,377 UK households – have been saved by its near-waterless commercial washing machines, which are EPP certified. A thought -provoking statistic when it is predicted that even the UK could face water shortages within 25 years.

So, as these disruptive water-saving technologies are moving along the path to commercialisation, we, as consumers of both water and white goods, can begin to play a part in the demand to reduce water consumption world-wide. 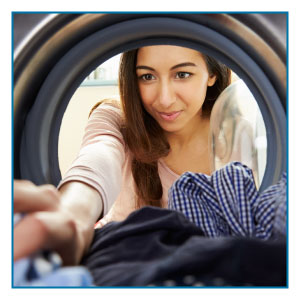