Should you use dryers or paper towels?

Dryers or paper towels? This is the eternal question when it comes to hand

sanitation. Hand dryers can be load and annoying, but are often regarded to by

cleaner than paper towels. But is this actually the case? Well recent studies  tell a

They say that it actually depends more on the person who is washing their hands. Newer hand dryers can actually spread bacteria around the room more easily, whereas paper towels hardly spread it at all. However, the study doesn’t show how all bacteria and viruses spread, because they all behave differently. Annoyingly, the study doesn’t tell us whether dryers are actively less hygienic than hand towels.

As it turns out, the debate may just come down to your own hand washing habits. If you wash them thoroughly, you are less likely to spread germs, if you wash them less well, there is more of a chance that you will catch something, and it won’t matter how you chose to dry them.

This is where it gets confusing, because a study in Australia claims that paper towels are categorically more hygienic than air based hand dryers. The claim that not only do they dry your hands more effectively, they remove more harmful bacteria, and that air dryers can spray microbes across the room, something paper towels don’t do. It also claims that without paper towels, levels of handwashing regulation adherence may start to slip in the workplace.

In terms of hygiene, the studies are inconclusive. But, in terms of greenhouse emissions, both systems are about as bad as each other. Newer hand drying systems are more eco-friendly, but the older hand dryers and paper towels that are so common in public bathrooms use up huge amounts of fossil fuels to make, and maintain. 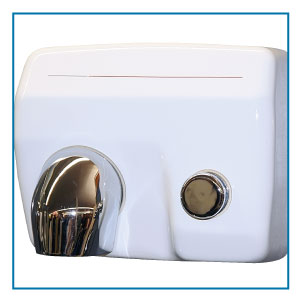