A change in gut microbiota, caused by commonly used

In conjunction with looking at exposure to disinfectants, detergents and eco-friendly products used in the home, the study analysed the gut flora of 757 infants from the general population at the age of 3-4 months and their weight at the age of 1 and 3 years.

It appeared that in babies aged 3-4 months old, had altered gut flora if they lived in households which used disinfectants such as multi-surface cleaners frequently. However, the researchers did not find the same association with detergents or eco-friendly cleaners. Similar changes have been found in the gut microbiome of piglets when exposed to aerosol disinfectants, according to studies.

If the household used disinfectants at least once a week, it was found that the infants aged 3-4 months were likely to have higher levels of certain gut microbes, and a subsequent higher body mass index at the age of 3 years than children who had not been exposed to heavy use of disinfectants at home when they were younger.

Interestingly, babies living in households that used eco-friendly cleaners were not as likely to be overweight as toddlers and had different gut microbiota. There is, however, limited evidence that the gut microbe changes decreased the risk of obesity.

Anita Kozyrskyj, a University of Alberta paediatrics professor, said, “Those infants growing up in households with heavy use of eco cleaners had much lower levels of the gut microbes enterobacteriaceae. However, we found no evidence that these gut microbiome changes caused the reduced obesity risk.”

She suggests that there may be a link between healthier eating habits and parental lifestyle in general and use of eco-friendly products, which in turn may contribute to the healthier gut microbiomes and subsequent weight of the infants.

So: an intriguing study which throws out some ideas that could be an interesting basis for further discussion – possibly classifying cleaning products more specifically by their actual ingredients and whether or not they may affect a child’s weight. 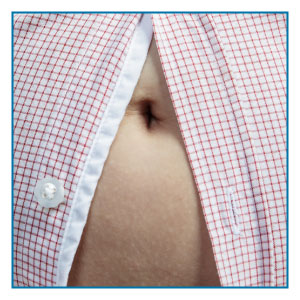