rotating ocean currents that pull marine debris like litter, fishing gear and plastic into one

location in the sea.

The most well-known of these – the Great Pacific Garbage Patch – is approximately twice the size of Texas, or three times the size of France, and contains an estimated 1.8 trillion pieces of plastic.

Last year saw the installation of a new Ocean Cleanup device: a huge, 2000-foot-long U-shaped floating barrier nicknamed Wilson. It was developed by the Ocean Cleanup Organisation to clean up the plastic converging in the Great Pacific Garbage Patch, located between Hawaii and California, in October 2018. Unfortunately, it is not retaining the plastic and so is on its way back for repair.

A routine inspection towards the end of December found that a 60-foot end section that guides the plastic has broken off so the entire system, including nearly 200kg of recovered plastic, is returning to shore. However, the 580m main section and the 18m end section are both completely stable, all bulkheads are intact, and attached stabilisers on the end section prevent it from rolling over on the way.

Ocean Cleanup suggests that one the of the possible problems is that the system sometimes moves more slowly than the plastic it’s trying to trap, enabling the plastic to escape. The system also affects the current surrounding it which results in small patches of plastic moving and accumulating around the system rather than inside it. This may also create waves that prevent the plastic from entering the mouth of the device.

Whilst this is understandably demoralising for the organisation, it’s fair to say that for any new technology designed to deal with massive ecological problems quickly – in this case with the goal of cleaning half of the Great Pacific Garbage Patch in five years at a rate of 50 tons of plastic per year, then setbacks are inevitable – and the only real way to monitor and review the system properly was to put it in situ.

After modifications have been made, Ocean Cleanup hopes that the system will be up and running again in 2019. Yet, given that 8 million tons of rubbish goes into the oceans each year, cleaning them up may feel like a Herculean task.

Perhaps we could do our bit by trying harder to stop the plastic and the rubbish from reaching the oceans in the first place. 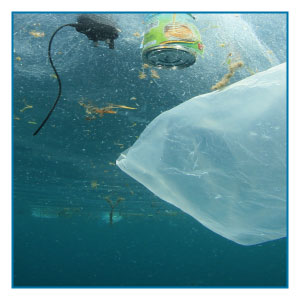