For most of us, cleaning is a necessary evil rather than a leisure activity to be approached with relish. As such, it tends not to be one of our highest priorities and yet leaving it doesn’t make us feel much better either.

Of course, some people gain a huge amount of satisfaction from cleaning their homes to perfection, and credit to them, but for the rest of us, here are some easy, low effort, big reward cleaning solutions that might at least help you to feel on top of things rather than swamped before you’ve even started.

First, put a load of washing on. You’ll feel like you’ve done something important and better still, it will be washing while you’re tackling other jobs, so you’ll feel like your time management is outstanding. One load at a time means that it never gets out of control, and the last thing you need is to have four loads that need doing in one go when you can’t peg out because of the weather.

So, sort it into different loads and just work through them one load at a time. Peg out, dry, air, or fold up and put away as you go along. Very satisfying.

In the kitchen, keeping on top of the dirty dishes will help you feel organised. If you have a dishwasher, either put everything in as you go along, or load it up with whatever crockery is lying around and switch it on to get clean surfaces for low effort in less than 5 minutes. If you don’t have a dishwasher just wash it up as you go along and then it should never become overwhelming.

Mopping the kitchen floor is few people’s idea of fun, and if you don’t prepare it properly, it can feel like the fluff and dust mixed in with the floor cleaning solution just makes a bad job worse. So, why not ditch the mop and just sweep and vacuum the dust and debris away. Doing this frequently cuts right down on actual mopping. Yes, you have to do it eventually, but don’t underestimate the difference a regularly (and easily) swept or vacuumed floor can make.

Next, think about the bathroom. If the idea of doing the whole thing is too much, just decide to get the soap scum in the shower and round the taps. If you keep a washing up brush or scrubber in the bathroom, you can tackle at a bit as a time – or even while you’re showering yourself.

Finally, have a quick look round and if you’ve got things that you don’t need, or use, or want, or don’t work, then get rid of them by repurposing or recycling or if there’s no other option, throwing away. You’ll be amazed at how much better you feel after a bit of a ruthless clear-out.

Little and often is the trick, and good enough is good enough, so be kind to yourself. 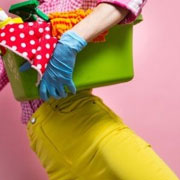