When it’s time to clear your desk.

Well, it makes sense doesn’t it? When your space is a mess, it’s bound to affect your work. If you’re up to your elbows looking for stuff on a messy desk (or desktop for that matter) you’re not working.

So far, so obvious, but did you know that research has shown the environment can influence our cognition, emotions, and behaviour, which in turn affects our decision-making and relationships with others – and not in a positive way?
You may even think you’re not bothered by the mess, but scientists at the Princeton University Neuroscience Institute have shown that our brains like order, and that visual reminders of disorganisation reduce both our cognitive resources and ability to focus. Similarly, they found that in a clean and tidy environment, participants were better able to focus and process information, meaning that their productivity increased.

Even worse, mess can also make us feel stressed, anxious or depressed as continued elevated cortisol levels can lead to anxiety and depression. Interestingly, it may work the other way too. When stress and emotional exhaustion causes workers to procrastinate, they keep material for all their ongoing tasks within easy reach – actually leading to a messy space.

And how many of us are a bit guilty of this? Thinking that people with messy desks are less conscientious, more disorganised and not as good at their work. Whether it’s true or not doesn’t change how we perceive them, nor does it improve their prospects if that’s what the boss thinks too.

So, what’s to be done? Well, it’s obvious really: tidy your workspace regularly to keep the clutter at bay before it becomes overwhelming. Then, cleaning up can’t possibly become an excuse not to work. And this is particularly vital to smooth relationships if you share a workspace.

Just a small glimmer of hope though if you feel like you’ve been on the receiving end of a telling off. One study has shown that messy desks can make us more creative. As ordered environments make us more likely to conform to expectations and play it safe, messy ones encourage us to look at things in a new way. You could argue that your untidy desk simply highlights your creativity and problem-solving skills.

Good luck with that one. 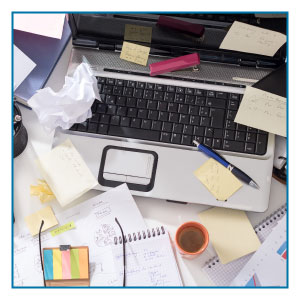