from toilet cleaner, to bleach, to vinegar, to kitchen and bathroom cleaner and everything in

between stashed under the sink.

And, as they all do much the same fundamental job of cleaning, you’d be forgiven for thinking you could mix them up a bit and make them work better in combination – right?

Wrong. Mixing certain cleaning products together at home can prove to be far more dangerous than you might ever have imagined.This is what one woman discovered when she mixed together bleach and toilet unblocker. Unbeknown to her, she was creating a poisonous chlorine gas cloud – known as mustard gas during World War 1 – which was outlawed in 1925 at the Geneva Convention.

Luckily, all ended well as when her eyes and throat began to feel as though they were burning, she called the fire brigade who evacuated her home and part of her street until the problem had been dealt with.

So, what common cleaning combinations should we avoid?

So, the golden rule is: don’t mix bleach with anything other than water.

Other non-bleach products that shouldn’t be put together are hydrogen peroxide and vinegar (sometimes recommended for work surfaces) which make peracetic acid – an irritant to the skin, eyes and respiratory system.

Also, a mixture of baking soda and vinegar – which has often been suggested as a handy DIY cleaner – should be avoided. When mixed together, the baking powder begins to foam up so if stored in a container the mix could at some point explode.

The fact is that many products which are perfectly safe to be used alone can create harmful chemical reactions or fumes when mixed together causing unpleasant or potentially dangerous symptoms. To be on the safe side, proceed with caution and always read the warning and ingredient label on the back of the container. 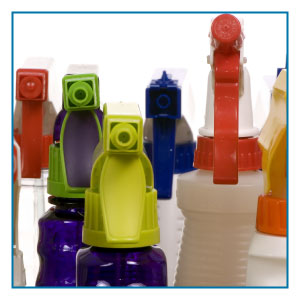