It comes as no surprise if we walk along a canal towpath or riverbank to find litter and other rubbish spoiling the way.

Although plenty of it stays, plenty also gets washed away and ultimately finds its way to the sea where it often adds to the pollution there – and while people are often be seen on ‘litter-picks’, doing their best to clean up the environment, it can be a never-ending task.

However, an initiative in San Francisco between the California Department of Public Health and the U.S. Environmental Protection Agency – the San Francisco Estuary Initiative (SFEI) – has started using drone technology to capture images along streams and rivers in real time. This enables them to spot rubbish more quickly and efficiently than the usual methods of volunteers or workers who are manually collecting the waste.

Obviously, the drone can revisit the same place more frequently and quickly than people on foot so it can be monitored for rubbish more often.
Areas of around several 100 metres long by up to 100 metres wide can be covered by the drones which, flying at around 30.5 metres, are close enough to the ground to photograph clear images but high enough to be above the treeline.

Using AI software that can manage planning, data collection and distribution means that the data can be analysed quickly, and rubbish can be spotted, identified, and potentially cleared – even though the weather, traffic, wildlife, and even human footfall can all intervene to move it from its original position.

“We thought, this is very old-school. Is there anything we can do to demonstrate what’s possible by leveraging new technologies? By taking a drone up we knew that we could cover more space, more quickly with fewer people, which would translate into savings of time and money.”

Not to mention the benefit to the environment. 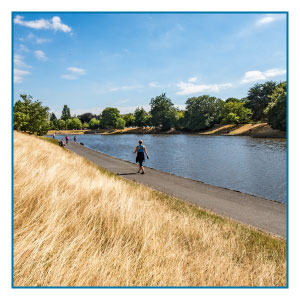 If you have a dog no doubt you wouldn’t be without it, but there’s no denying the joy of ownership comes with a penalty of mud, hair, dust and dirt. So, how do we keep on top of things in the doghouse? Well, after a walk, use a damp cloth to gently wipe down their...

END_OF_DOCUMENT_TOKEN_TO_BE_REPLACED

Hot in the office

While most of us enjoy it when the temperature rises, hot weather can take a toll on office productivity. Yet given that we can’t all move round the office as the sun moves round, what can we do about it? Well, a bit of common sense doesn’t go amiss, starting with...

END_OF_DOCUMENT_TOKEN_TO_BE_REPLACED

Keeping pests out of the office.

The last thing anyone wants, as back-to-the-office work gradually returns, is to find that in our absence, unwanted four-legged visitors have decided to share the workspace. Basically, pest control in the work environment is fundamental and essential as failure to do...