Why we need to do more for clean air?

by 50% due to government action. Good work, yes, but toxic

air is still a health hazard that continues to need urgent

The reason for the fall was the clean up of vehicles and power stations over those 40 years, but in the meantime, ozone pollution and ammonia emissions have risen and have yet to be tackled with the same urgency.

Even though our air quality policies work, air pollution is still significant, and our understanding of how it can damage health is increasing. And while experts agree that there is no real ‘safe’ level, here in the UK, the main air pollutants are above legal or WHO limits in most urban areas.

Clean air policies have created improvements, however. After coal power stations were targeted, sulphur dioxide (a cause of acid rain) fell most sharply, and stronger EU vehicle regulation has led to more recent falls in nitrogen dioxide and small-particle pollution -leaving the health impact today at similar levels to those of 2010.

It seems that the successful fall in pollution is a result of policies which have targeted the most easily dealt with pollution first. This means that reducing pollution levels from now on, becomes harder.

So, encouraging us to walk, cycle and use public transport whilst also encouraging the uptake of electric vehicles is clearly advantageous not only in terms of reduced emissions, but to our own health and fitness. Likewise, eating less meat, the production of which uses more energy and creates more nitrogen emissions than other food sources, would be good both for the environment and our health.

The consensus then? Our policies to reduce pollution are working, but there’s still a lot more to be done. 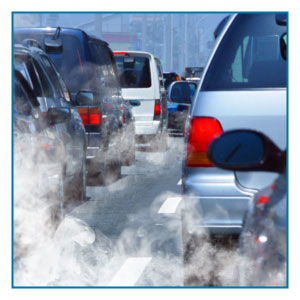